I've created a little webpage which displays Chinese character flashcards. It began as a project to help me with my own Chinese character learning, but if anyone else finds it useful too, so much the better.
Posted by a blogger at 10:25 1 comment:

Taking a brief break from the cycling, I was looking for a map showing the location of all the public libraries in Birmingham, and couldn't find one.

Any feedback and suggestions for how I could improve the map would be welcome.
Posted by a blogger at 15:50 No comments:

Jiang Zemin and his Three Represents 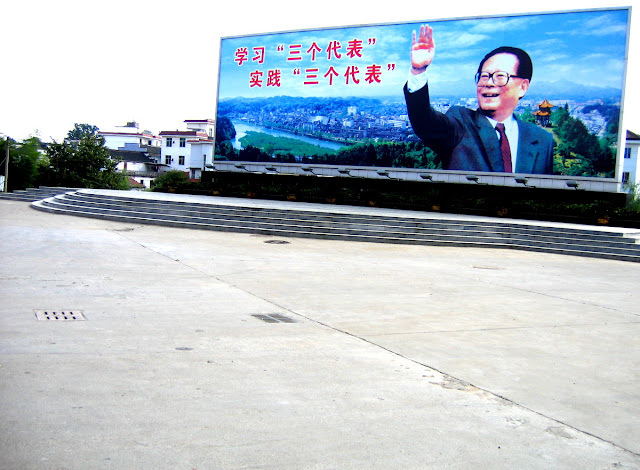 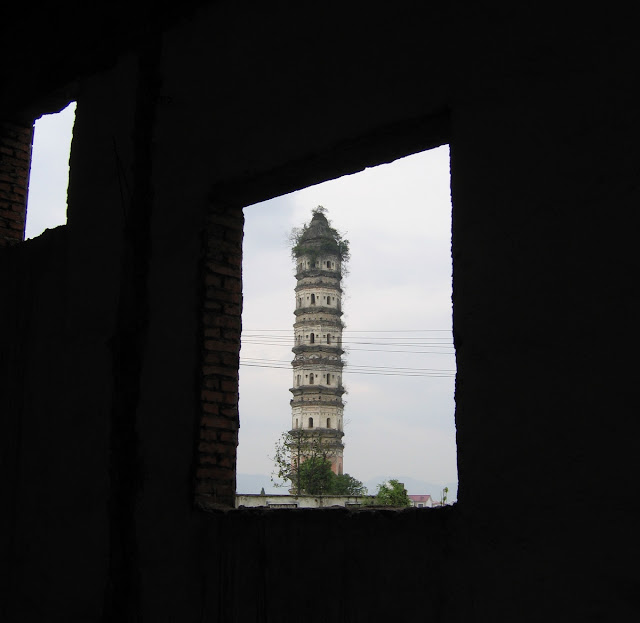 "In Wuyuan," my middle school conversationalist informs me as I slurp fried rice noodles for dinner, "many people say that the sky is blue and the water is clear."
This information may once have been true, but is surely at least 50 years out of date. Nowadays, as any fule kno, nowhere in eastern China is the sky blue or the water clear.
The day's main event was a flying visit to Jiangwan. The houses in the all other villages on the road were low, old, dark and pre-modern, but in Jiangwan, everything is tall, new, and freshly-painted. Everything is in straight lines and the people are dressed smartly. The reason for this is announced on a banner at the far end of the village: "Welcome the tourists both at home and abroad to come to visit Jiangwan, the ancestral home of the President Jiang Zemin".
There is a tarted-up high street that you can walk down, if you want (though this will cost you 50 yuan), and buy Jiang Zemin themed keyrings. About 25 girly guides are hanging around the entrance, waiting to show people round. This morning there were no paying customers. Perhaps when JZM goes up to the big Jiangwan in the sky they'll do better business. I doubt it though. Jiang is never going to be a folk hero like Mao, for all his Three Represents.
It's a pretty valley with rice crops in various stages of planting, growing and harvesting. All around are sharp, sheer wooded mountains; in the fields, t-shirts and hats on sticks scare away the birds. Huge water-buffalo wallow in streams.
A man ploughs his field with buffalo, shouting commands as he turns his single furrow. What does the buffalo think? Does he understand the point of ploughing? Why does he consent to walk up and down all day? Does he think that human beings have some pretty strange ways of having a good time?
There are praying mantises and bats, dead on the road, and little bright green snakes. I wonder: if there are this many dead snakes, how many live ones must there be out there? Later, I see a biggish one, grey brown, limping off the road at the sight of me, if snakes can be said to limp.
Posted by a blogger at 16:24 No comments:

Cycling to Huangshan in Anhui, China

From my diary, Sunday 11th September 2005
Laoban tells me he gets 25 yuan per jin (1) of hickory nuts. That's what he charged me for bed and dinner. His son studies in Beijing, he says. The villagers line up to wave to me in the morning, mums and dads encouraging their toddlers to say "bye-bye".
Climbed all morning up to the Lu Ling Guan pass, between Zhejiang and Anhui provinces. An old gate-house fort stands guard at the top - as you move toward the provincial border all civilisation fades away and the land gives way to wild forest. The banner over the highway says "Chinese history and culture city. The Shexian county is welcome you."

Bananas and moon-cakes for breakfast, the bananas pretty standard but the moon-cakes unusual, stuffed with orange jelly. Perhaps it was they that got me thinking about Sir Edmund Hillary. A less modest scaler of the Earth's highest peak might have called himself Mountainary.
And then for some reason I couldn't get Bronislaw Malinowski out of my mind - yes, he who missed his stop at Warsaw Central and got off instead at the Toblerone Islands (or was it Chateaubriand?). And then along came good old Sir Edward Evans-Pritchard, another anthropologist, who decided to settle the long-running dispute between the structuralists (who wanted to build a better mousetrap), and the functionalists (who thought there was no point unless it caught better mice). He declared that in future everyone could call themselves structural functionalists (but not functional structuralists) - until a bunch of denim-clad Frenchmen led by Claude "Levis" Strauss showed up and started making a fuss, for reasons no-one could properly understand, about Tristram Shandy (or was it Tropicana?).
But this is by the by.
Up at the pass it was cool and the air in the high villages smelt buttery, but the road dropped quickly into Anhui and soon it was warm again. I left the nut-growers behind me; now I am back in rice country, with aubergines and peppers growing in the gardens. Further on there was maize, too, and cotton. The rice harvest was underway, stalks of rice laid out on the road to be threshed by the traffic, of which there is virtually none. Sheaves of beans drying at the roadside.
Tried to camp out tonight, but eastern China follows the "3 Unders" policy: everything is either under concrete, under cultivation, or under water. (This is a little-known precursor of Jiang Zemin's "3 Represents" policy, which in essence states that everybody falls into one of three categories, and the Party represents all of them, so be quiet and get on with your jobs, while we get on with governing you."
In Shexian town there's a huge PSB (2) building with a banner that says "Mankind are harmonious with Nature. She Xian County are mixed with Beautifulness", and there's more on this theme a little further down the road: "Warmly welcome the 34th Miss Intercontinental to She Xian. Well-known town. Civilisation. Charm. Signed by: She Xian Committee of the Communist Party of China, and The People's Government of She Xian County." A picture of a beaming Miss Intercontinental, Miss Peru, and Miss Columbia, accompanies.
Out of town, past the the toll station, this: "She Xian County, the capital of Ancient Hui Zhou, greet the Beauties all over the world with a smile". 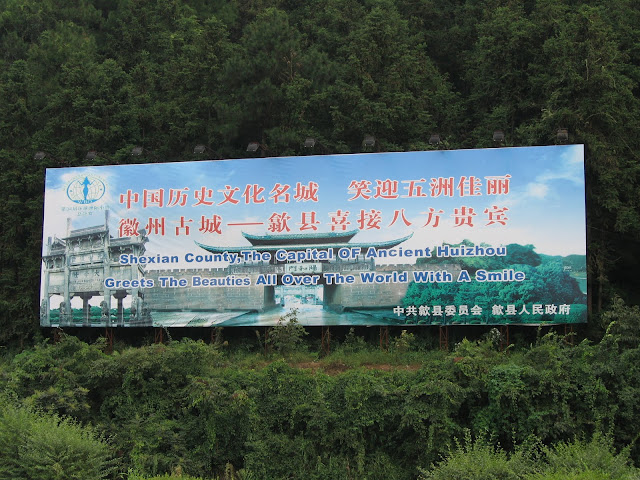 Oddly, no-one in She Xian smiled at me. What can this mean?
Anyway, I wind up here in Tunxi, the relatively unlovely town which serves as the railway depot for travellers to Huangshan Mountain. Grander hotels in town are trying to re-brand the place Huangshan City - they think it sounds better. It does. I book into a tiny hotel room in the middle of the bus station, brothel and sex shop zone. Definitely Tunxi.
--
Notes
(1) 1 jin = 0.5 kg
(2) PSB = Public Security Bureau (gong an ju) = Police
Posted by a blogger at 16:15 3 comments: 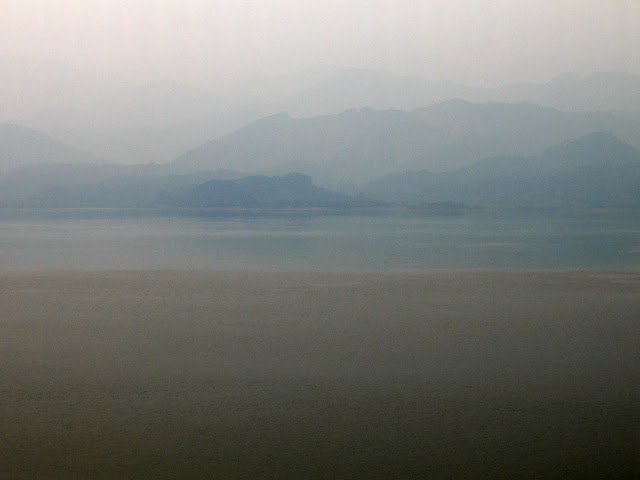