Saturday 10th September 2005. Jiakou, Zhejiang, China
Starting to rediscover what distance really means in China. No longer is Huangshan just a day's drive away on the expressway, or Beijing an easy overnight on the soft sleeper express. Coming face-to-face with China's mammoth road-building programme, some of which, nearly-complete but not yet open to traffic, provided perfect riding, at least until I came to an unbridged chasm and had to slip and slide down a fifty-foot embankment to get back on the old road.
Of course, once they are open, these wonders in concrete and asphalt are deemed too smooth and stylish for mere bicycles, who have to pick their way along rotting old village roads, which roll up and down every hill available; the new motorways are miraculously flat even in the hilliest terrain.
Beekeeping is big business round here. One truck came past me stacked high with wooden bee-hives - and with hundreds of tired-looking bees struggling in its wake to keep up.
A boy at the side of the road, holding a huge snake by the neck. I suppose a snake is all neck, really. Unless you start at the other end, in which case it's really tail all the way.
On top of the buzzing of bees, the hills are alive with the sound of nut-huskers. That's what everyone around here who isn't keeping bees does: husks nuts. Hickory nuts, in fact, I discover. (Forget bamboo-stripping, that's yesterday's game.) You rake them out on terraces to dry, you soak them (I may have got the order wrong here), you feed them into some kind of shelling machine, you load them onto trucks. The roads run red with washed out nut-husk juices.
There are a lot of dogs round here but no-one seems to have told them about chasing bicycles yet. It is, surely, only a matter of time before they catch on to the fun that their doggy cousins around the world are having.
I'm sitting in laoban's TV room because he's too busy to check me in to his grotty mosquito-pit upstairs. He's doing something noisy, I expect that means nut-husking. The TV is playing "The Hills are alive with the sound of music" and "Doe a deer".
Aha! Laoban has just re-appeared, bearing glad tidings, no less. He has upgraded me to a much nicer - and apparently mosquito-free - room in a separate house across the road, with my own personal roll-down garage door.
Wander round a rather lost-looking supermarket (in this tiny one-street village), playing hide-and-seek with my appointed follower-around on the second floor.
Mrs Laoban cooks me yu xiang qiezi(1) with lashings of rice. Marvellous stuff.
Note
(1) "Fish-flavoured" aubergine. This is the best thing you can do to an aubergine, and it doesn't taste of fish.
Posted by a blogger at 07:15 No comments: 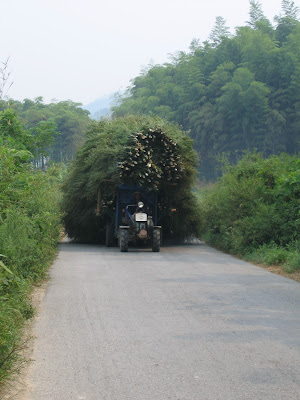 All along road people, old grandmothers especially, are stripping bamboo with beaked hatchets, tying up bundles of bamboo leaves, stacking and sorting canes, feeding them through metal stripping machines, loading them onto little trucks which disappear under their loads.
Some people are making good money out this, to judge by whole villages being rebuilt with huge gaudy Disneyland houses, pink Corinthian columns supporting gothic castle turrets on the roofs.
Later I pass a sign to Anji - "The Hometown of Bamboo". Irridescent blue and black butterflies in the bamboo forests.
This little village, Changle, doesn't seem to have hit the bamboo big-time yet, though it has at least two places to stay. At the first, I meet a very enthusiastic guest, singing the praises of the place. The laoban(1), though, is more downbeat about the idea of my staying. So I head across the road to the Long Feng Da Jiu Dian, where I find a room upstairs in a 5-bed dormitory.
Prowl round town, hunting my essentials: juzi(2), bananas, biscuits. Dinner downstairs at the Da Jiu Dian, spinach and tomato with rice. Mr Bean's steak tartare sketch is on the TV. Outside, the karaoke/disco is really thumping, someone hooting into the microphone with more gusto than talent. Good for him, I don't even have gusto.
Man tells me: "you know, you look really like a laowai(3)." I don't think he believed I am a real laowai. (Here in Changle!)
Notes
(1) Boss, owner, man-in-charge, person in authority, man with key.
(2) Tangerines, clementines
(3) Foreigner, especially westerner
Posted by a blogger at 16:00 No comments:

On the way to Huzhou (diary reprise)

8th September 2005. Huzhou, Zhejiang, China
On the TV, Beijing beat Shanghai on aggregate, after extra time, last night.
Breakfast: bananas in room.
At Pingwang, a bridge takes the G318 over the Grand Canal. Last year I turned south here, towards Jiaxing and Hangzhou. This time I follow a small road to Hengshan and from there to Miaogang. This must be the only quiet road in eastern China. I can even hear the birds and cicadas.
Along the south bank of Taihu, duck farms with flotillas of white ducks, bright sun, clean air, no traffic, beautiful riding. Fresh smell of marshes coming off the wide, shallow lake, which stretches weedy and reedy to the horizon. A convoy of small boats chug along in line, collecting lake weed. Crab-fishermen mending their nets along the shore. At a little restaurant at lunchtime they offer me freshwater crayfish, which share a tank with a pair of sad-looking condemned fish. I go for my usual, fanqie chao dan(1). A mother ba-ing(2) her baby on the steps.
Tableau: peasants in straw hats cutting reeds and grass with scythes. What we pay our visa fees for.
Road runs along levee, with the lake on right, and garden plots full of cabbages and onions below on left. Warblers and egrets all along the shore. Rice fields glow green and then gold in evening light.
Outside zhaodaisuo(3) is a street of point-and-shoot fry-em-up stalls, you name it, they've got it - from bags of jumping frogs (live) to pig nostrils (dead). Up the road is a throw-the-hoop-over-something-ghastly game. There is no shortage of customers; the lucky ones don't win anything. The more unfortunate have to take some astonishing tat home: miniature hands made of plastic, and little china figurines that make garden gnomes look classy. The only prizes worth winning - mobile phones - are actually impossible to win because they are too big for the hoops.
Cricket: first day of final Ashes test. England wobbling at 115/3 at lunch.
Notes
(1) Fried egg and tomato.
(2) Potty training, without potty.
(3) Guesthouse, hotel
Posted by a blogger at 15:23 No comments:

7th September 2005. Jin Ze, China.
Sit for a Russian-style farewell with Aliona. Leaving hurts; I feel tight-throated. Ride the way I seem to know well now, past Hong Qiao airport, out onto the Huqingping Gonglu / G318. "Develop highway and vigorously develop Shanghai" encourages a sign above the road.
In Jin Ze, not only do they remember me from last year, they still have my registration sheet on the desk. They ask where my beard has gone. Noodles with a fried egg in a Lanzhou Noodle joint. Fat orange sun sinks in the haze and a tiny sliver of dark yellow crescent moon appears. Hotel room floor is concrete red splattered with yellow splattered with grey.
Posted by a blogger at 15:14 No comments:

Zhutang, Yunnan province, China. 11th January 2006.
Laoban at hotel is a nice bloke with one arm. He shares the vice of many by wanting to engage me in conversation while I am brushing my teeth and my mouth is full of foam and bristles.
Posted by a blogger at 17:30 No comments:

The first in what I hope may become a series of snippets from my diary.

Funny little hotel room: two-tone walls, green and dirt, and a rotting arm-chair. But you don't expect much for 10 yuan. The laoban tried to get me to take a 20 yuan room on the grounds that I am "too tall" for a 10 yuan room. I think this is not in fact the case; time will tell.
Posted by a blogger at 17:21 No comments: